FlashFixers’ data services in demand as use grows

STRATHAM — Dead isn’t really dead when it comes to retrieving pictures and other data from comatose electronic devices, according to Richard Gurecki. 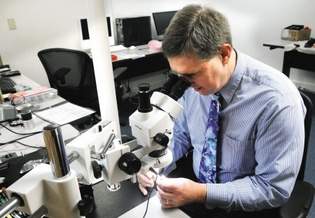 He is founder and owner of FlashFixers, a data retrieval business that has seen a real uptick in business with the proliferation of smartphones — and the number of people who drop them in the toilet.

“Pretty much anything that holds data, we’ll figure out a way or get the tools to get the data out,” Gurecki said.

FlashFixers is located in leased offices at 81 Portsmouth Ave., space Gurecki moved into about four years ago from his home office. He started the business in 2002 after working as a part-time computer consultant, hitting on the idea that he could help people retrieve pictures from electronic cameras that wouldn’t work anymore.

“Just through self-study and trial and error and some research at the time, I got this figured out,” he said.

The business grew to include computer hard drives and flash drives, then grew more as cellphones and smartphones have become more and more ingrained into people’s lives.

The big turning point thus far was a deal with Walgreen’s in 2010 to serve as its vendor for media recovery.

Go to any of the more than 7,000 Walgreen’s stories nationwide with a dead phone with all your pictures trapped inside, for example, and the store will send it to Gurecki’s shop in Stratham for evaluation and retrieval.

“We’ll do the recovery and send back to that store with the photos and the media on that card,” Gurecki said.

The Walgreen’s deal not only precipitated the move from home to his offices but allowed him to grow from a one-man shop to four employees. And he anticipates the business will continue to expand as the use of smartphones continues to grow.

“Our emerging business is really phones now,” Gurecki said. “We’re with our phones a lot more than computers.”

In fact, our phones have become our computers in some cases and our cameras as well.

The challenge of data retrieval isn’t in the spinning hard drives of some computers or memory chips and sticks. The challenge, according to Gurecki, is in retrieving data from smartphones.

“They don’t lend themselves to recovery of deleted content,” Gurecki said. Nevertheless, he boasts an 80 percent success rate of retrieving lost photos, videos, contacts and other content from iPhones.

And the biggest reasons these phones are damaged and need data retrieval is water damage. According to Gurecki, people drop them in pools and sinks and toilets with increasing frequency.

He recalled the story of a man in North Carolina who went fishing in a saltwater bay, his phone in his pocket protected (he thought) by the waterproof case he had purchased. The case leaked and the water got into the phone, made worse by the corrosiveness of the salt in the water.

The phone came to FlashFixers and, according to Gurecki, it got an ultrasonic cleaning, then certain parts that had been corroded away were soldered using parts from another working phone.

“We got it to work,” Gurecki said. “We got full recovery and all the family’s photos and got it back to them and they were extremely pleased.”

Another area of growth for FlashFixers, according to Gurecki, is digital forensics — extracting data otherwise deleted of an investigatory nature for lawyers and public defenders.

“Every text, every call, every contact, every picture — all that data is retrievable. Even if it’s deleted it’s often still there,” Gurecki said, adding he is certified on the use of software and hardware tools related to digital forensics.

In addition to the recovery and retrieval, the business offers computer and network technical services and PC and Mac computer repairs.

Gurecki is driven by wanting to help people.

“I love helping people, finding their pictures or content,” he said. “There’s a personal enjoyment that drives me.”