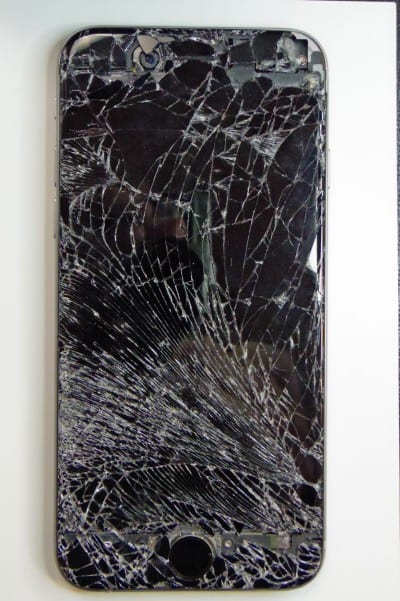 Your Phone Got Run Over By A Car. Now What?

You set your phone on top of the car while buckling up your kids. You forgot about it, and drove away. It slid off the back, crash-landed on the pavement, and was run over by another car.

You were in a hurry to leave when you set your phone down on the back bumper to load up your trunk. You drove off, and before you knew it, your phone was missing. When you finally found it, it had tire tracks on the back of it. And the screen was cracked with lots of broken glass.

Your phone just spun off the roof going 35mph, before getting run over by multiple cars and landing in a puddle. Also, it was raining.

Believe it or not, these are true stories. And the endings are all the same.

You’re Stuck With A Broken Phone That Doesn’t Work.

Your phone is dead (and about as useful as a paperweight). The screen smashed, the frame bent, and the touchscreen not working. Or maybe it has a faint heartbeat, with pockets of liquid black spreading across the screen.

But it’s not looking good.

It’s unresponsive. Of course you don’t have a backup. You just want your pictures off it.

Is there any way to fix it? Can you get the pictures off somehow?

The bottom line is: Yes, it IS possible to recover data from a phone that’s been run over by a car.

Even if it has a cracked screen, bent frame, or doesn’t turn on – that might not matter. What does matter is the condition of its memory chips or logic board. (More on that below)

So despite what you may have heard from local repair shops, big-name phone manufacturers, or online discussion forums, don’t give up hope. At least not yet. Wait until after a microsoldering expert has evaluated your phone.

How do you fix a broken phone that got run over?

When you try to plug it in, it won’t power on or connect to anything. When you plug it into the computer, your computer doesn’t recognize the device. Or, maybe it does recognize the device, but your touchscreen isn’t working. So you can’t enter your passcode for the computer to trust it. And even if it does connect with your PC, it might not connect with itunes, so you wouldn’t be able to browse the file directory.

Next, you might download software to help you recover your phone’s pictures, videos, and other data. But what if that still doesn’t work?

You take it to a local repair shop. They replace the screen and battery. Maybe it turns on. Maybe it doesn’t. They might tell you the motherboard is damaged, and there’s nothing they can do.

You contact the phone manufacturer. You need to replace the phone, but you also want your data back. The manufacturer recommends the data recovery company they are contracted with.

You contact the data recovery company and are quoted $900-$2,000. For the economy service. (But the evaluation is free, and as further “enticement” you might get free overnight shipping, so…)

Your next step is to talk to a microsoldering expert directly. 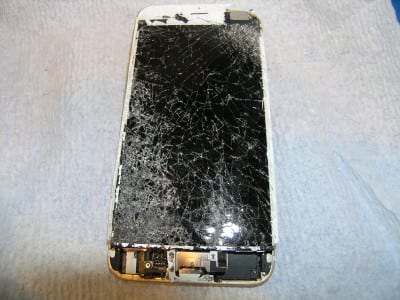 People often ask us, “Can I get pictures off my broken phone?”

Believe it or not, dealing with a phone that is damaged beyond repair is not uncommon for data recovery companies and phone manufacturers.

And it’s not all bad news, either. In fact, it’s typically good news.

The iPhone, for example, is protected well with a stiff case and a resilient logic board. The newest iPhones, including the iPhone X, XR, XS, and XS Max, have a logic board that is split in two and soldered together, essentially forming a sandwich. This arrangement does lend itself to recovery even when dropped.

But it’s not just newer iPhones that are well built. Even some of the older iPhones and Android phones are built to withstand a fair amount of external damage.

So what does this mean for phones that have been run over? Does having a phone case help to protect it?

Well, when a phone is run over, it’s not like you’re running over an unprotected board. An additional phone case wouldn’t protect from everything but it would add to the stiffness of the phone and help protect the logic board.

Fixing a phone that’s been dropped or run over is fairly straightforward.

When a phone does get dropped, connections can break and detach. But that can be fixed. Missing connections can be soldered individually, and memory chips can be transferred to working logic boards.

Even in extreme cases, where the phone and logic board are bent, recovering your pictures may still be possible.

When we do data recovery for phones that have been crushed or run over, here’s what we usually see:

People have often lost hope after going directly to the phone manufacturer. They are told that their only option is to upgrade. When in reality, only a professional can assess whether the data is recoverable or not.

You can replace your phone but not your data.

If you feel like there’s still a chance to get your data back, even if you don’t know exactly what to do, you might appreciate Yilei’s story.

Yilei’s iPhone was run over by a car, and she tried everything to recover her data, but nothing worked. Until she found FlashFixers.

Here’s what she had to say about working with FlashFixers:

Our iPhone was crushed by a car, and the screen is totally smashed. It doesn’t turn on at all, although FindMyiPhone can still locate it. There are many 3rd party softwares claiming to be able to restore the data, and we tried a few of them, but none of them actually worked. All were stuck at the step of asking you to input the password through the screen, which in our case didn’t work. The phone was totally dead.

We tried to use a keyboard with the lightning port, it didn’t work either. The Apple store technician tried to replace it with a new screen hoping it would start up so we can input the password and proceed with an iTunes backup. But it still failed.

We even tried to open the phone ourselves to see if we could make it start up, but nothing worked.

We were very frustrated and disappointed. It had more than 6,000 pictures recording more than half a year of our life.

Fortunately, we found FlashFixers when searching through Google. The price they charge is much lower than other vendors in this area, and the whole experience is very good. They fixed it very quickly after receiving the phone, and returned our data through a flash drive. They even didn’t charge for any deposit for the flash drive they sent in, simply requesting us to return after we copied the data.

They are very nice people to deal with, and most importantly, they can help you to retrieve your data back when all other approaches I tried (as mentioned above) failed, including AppleStore. Definitely will use their service next time and would be very happy to recommend it to other people in a similar situation!

Bottom line: If you have a crushed phone and you just want to get your data back, talk to a microsoldering expert directly. And don’t lose hope until after you’ve talked to one.

Is a phone that got run over covered under warranty?

Is it too late to purchase accidental damage coverage?

Probably yes. Accidental damage coverage typically needs to be purchased within 30 or 60 days of buying a phone. You can check with the company you purchased the phone from or your phone’s manufacturer.

Does AppleCare cover phones run over by cars?

No, AppleCare does not cover phones that have been run over by cars, but AppleCare+ does.

Does AppleCare+ cover phones run over by cars?

Yes, AppleCare+ covers two incidents of accidental damage within a three year timeframe beginning when you first purchased the care plan. However, you are only eligible to purchase AppleCare+ for your device within 60 days from your device purchase date.

If you do have AppleCare+ and use it to cover your run over phone, you will still have to pay a deductible. Check with Apple to see the most up-to-date costs, but at the time of this post, the deductible for screen repair is $29 and the deductible for all other damage is $99. Consider these costs when you are thinking about purchasing the $200 plan in the first place.